The film begins with an orchestral flourish, the camera almost sprinting above the luscious grass as it hurries towards its radiantly twirling protagonist, filmed on this green field against a backdrop of jagged mountains. Then the scene cuts to a close-up of the star, Julie Andrews, and she trills, “The hills are alive with the sound of music,” arms outstretched in rapture. Here, all alone by a brook, among the saplings, coursing along the brow of a hill, this odd crop-haired figure in a childish pinafore seems to be going through an epiphany of sorts, communing with the purity of the elements—fresh air, clear water, intact blades of grass.

Watching the film on repeat, we know that the mountains represent more than this—they stand for an idealised, supra-national sphere away from politics; away from tyranny, most of all. The heights and isolation of the landscape surrounding Maria exist in stark contrast to the skulduggery of mankind in the valleys, which are alive with music, sure, but mostly Nazism. The hills also stand for simplicity, away from the difficulties of religion, sexuality, and politics: no decisions to be made here, no sides to pick. “I go to the hills, when my heart is lonely,” trills Maria as she strides over the horizon filmed from below, “I know I will hear what I’ve heard before. My heart will be blessed with the sound of music—and I’ll sing once more.”

The idea of the mountains as a place of healing, of soul-searching and recovery, a resort for spiritual and psychological well being, is not a completely modern one, but has flourished fairly recently. In eighteenth and nineteenth century Britain, doctors recommended taking the sea air rather than ask their patients to brave the mountain climes—and the vertiginous drops of North Wales and the Lake District were valued more for the adventure they offered to a new generation of tourists, as well as for their embodiment of the picturesque and the sublime. In later years, the great sanatoriums of Europe and the USA sprang up after the bacillus that caused tuberculosis was identified by Robert Kock in 1882: these places promised safe quarantining, a hermeneutic design, and lashings of good mountain air.

A year before this, Johannna Spyri’s Heidi embodied the essence of fresh mountain living, its protagonist discovering happiness with the kid goats that roam the mountaintops and gaily befriending the rough-mannered inhabitants of the hills in all their bucolic simplicity. When Heidi is taken back to Zurich she sickens until she appears ghostly, and is hastily returned to the mountain in order to avert certain death. While there, the child receives her infirm friend Clara to stay, and the invalid is miraculously found able to walk. The book was made into several TV series, cartoons, and films, including a popular version starring Shirley Temple in 1937.

It’s worth adding that the Alps—representing a terrain between France, Italy, Austria, Switzerland, and Germany—carry a numinous political meaning, a liminal logos, referring back, perhaps, to the statelessness that Maria finds so enchanting in The Sound of Music.

Into this land skulks Georges, the antihero of Quentin Dupieux’s grisly and delectable Deerskin. As we glimpse him towards the start of the movie, attempting to dispose of a whole jacket down a toilet that overflows as he flushes it repeatedly and maniacally prods the hated coat further down into the toilet bowl, this is a man who clearly has problems in severe need of exorcism. We gather from some beautifully elliptical moments—voicemails, information let slip in conversation—that Georges’ wife has finished with him. He retreats to the mountainside, to start his life anew.

But the wonderful trick that Dupieux plays on us—a rug-pull to an audience expecting any sort of trite We Bought A Zoo-isms from this set-up—is to have Georges sink further into his folly, or rather to branch his madness and weltschmerz out into new, alarming directions. The restorative properties of the mountainside are ignored; the idea of regeneration embraced too soon. Dupieux shows us a diseased man, someone who cannot see his own environment except as a facet of his own breakdown. In this he is reminiscent of Philip Larkin’s “The Old Fools”: “crouching below / Extinction’s alp . . . never perceiving / How near it is.” In this beautiful, timeless space, Georges chooses to fixate on a hideous suede jacket, bedecked with grotesque tassels and fringes, giving him the air of a pathetic cowboy. He makes it his life’s mission to become the only person in the world who owns a jacket—a manifestly impossible task, which involves anything from stealing jackets off strangers to offing random people he sees wearing jackets.

Dupieux’s intelligence here is exceptional: this is a simple story, and one driven by an absurd premise. But the director is upending absurd ideas of ‘happily ever after,’ and of life decisions that prompt a kind of blossoming after a fallow period. On the contrary, if Georges finds a new tack here, it is an alarming, truly insane one—and the way he indulges it shows him to be venal and truly without morals, as well as deeply out of touch. (Dupieux has fun with this: the town seems to be set in a kind of temporal aspic, Georges’ fashions are from a bygone era, and the character’s lack of technical know-how sees him befuddled by rudimentary gadgetry.)

This idea subverts our understanding of masculinity, or rather of filmic masculinity, with a hero who learns and changes. Dupieux shows us someone who may have changed, or who may be deepening his very worst tendencies: paranoia, deceit, scheming, thieving. It’s a blistering, and obviously hilarious, portrait of a wholly diseased masculinity.

Dupieux underlines this by having Georges pair up with Denise, a far younger barmaid who is studying to be a film editor. She offers to cut the footage Georges has filmed with his Steadicam, of himself in his vile deerskin ensemble, and of him taking out various villagers he meets who are so unfortunate as to be wearing a jacket near him. We see to what extent Georges is willing to cheat Denise out of her money to get his terrible snuff film made—although she is savvy enough to be onto him, she also has some understanding of the world, and perhaps some artistic talent. If Denise is taken in at all by Georges, it’s because of her enthusiasm and her desire for a project, for excitement rather than because of an all-consuming obsession, as is the case with Georges. Her ability to connect contrasts with the way he only interacts with people as facets of his own malady.

Of course, Deerskin is a comedy—a sick and absurdist comedy, certainly, but a very, very funny one. It’s this mode, rejecting smugness and self-seriousness, and instead embracing a lemony worldview, that makes Deerskin such a potent rejoinder to all the cliches it is playing off and thumbing its nose at. The film’s beginning is in fact a scene from its middle: the movie blurs the lines between beginning, middle, and end, suggesting that humans don’t ‘grow’ in the way a narrative of restoration might expect of them.

In this world, there is barely any social justice; there are few jobs; the racial politics of the place seem to codify a Vichy-style France of white people, in old, musty decors. We know the internet exists in this universe, but we see precious little modernity: this makes its characters tropes; Jean Dujardin, playing Georges, essentially figures as a fundamental man—a devastated man at that.

The film’s hilarious and surprising last scene takes us right out into the open air, onto a field of luscious green, where Georges and Denise are to film a scene for their movie. The deadly shock of the events that follow is made all the more juicy, all the more preposterous for their setting in this pristine environment. The hills are alive with vengeful murder—and Dupieux will whistle once more.

Caspar Salmon is a freelance journalist specializing in film and culture, with a particular interest in queer cinema and the way art reflects the politics of our time. 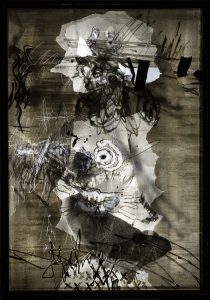 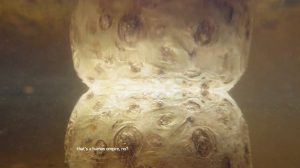 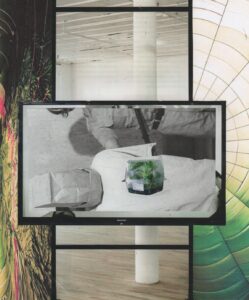