with artwork by HANNA LEE JOSHI

In her debut book, Why I’m No Longer Talking to White People About Race, British journalist and author Reni Eddo-Lodge based her decision to exclude white people from conversations about structural racism on the “emotional disconnect that white people display when a person of colour articulates their experience.” In the nearly two decades that I have lived between Europe and the United States, I have noticed a bifurcated version of this phenomenon. Whenever the topic is American racism, the Europeans in my circle have been knowledgeable of, and vocally against, the historic discrimination of minorities or the current caging of Latinx children. Unfortunately, this civic engagement quickly dissipates whenever the topic shifts to European racism, especially relating to the causes and outcomes of the enduring refugee crisis.

Perversely, the crisis relates less to the fatalities—over thirteen thousand recorded deaths crossing the Mediterranean—than to the arrivals, including over one million refugees to Germany alone. The influx has largely been attributed to German Chancellor Angela Merkel, and support for the Christian Democratic Union, her conservative ruling party, has decreased in favor of the far-right Alternative for Germany. A common refrain to explain the loss in vote share is that the CDU has not been “conservative enough,” as Der Tagesspiegel’s Frank Jansen insists, but I was still startled when friends I have known for years suggested the same, blithely unaware of my precarious status as a Black, gay, foreigner and immigrant. When further discussions with the same friends revealed their own anti-immigrant bias and support for racial profiling—the same discrimination that they otherwise know destroys black and brown bodies in America—I followed Eddo-Lodge’s maxim and no longer talk to Europeans about race.

Correction: I no longer talk to white Europeans about race.

I’m always talking about race and racism with PoC friends in Germany and the UK, but when you read the word ‘European,’ whose face do you see? For all of Europe’s diversity, ‘European’ commonly equals ‘white,’ even though both identifiers are relatively recent social constructs, ones that have existed only since the early modern period. Without knowing who you are or where you come from—where you really come from—I can easily assume that no matter how much you know about European culture or European history, whatever you have learned has likely been exclusively about white European culture and white European history. But where exactly is Europe, and who precisely is European?

In the film adaptation of the musical Cabaret, the American cabaret performer Sally Bowles (Liza Minnelli) resignedly sings: “The continent of Europe is so wide, mein herr. / Not only up and down, but side to side, mein herr. / I couldn’t ever cross it if I tried, mein herr,” without detailing the exact length and width. This ambiguity reveals much about the disconnect between the geographic expanse and perceived limitations of Europe’s borders in the European imagination. Asked to name the largest European city, educated people are most likely to answer London or Paris, possibly Moscow. These answers feel right given these cities’ majority white populations and cultural significance, but with nearly fifteen million inhabitants the correct answer is Istanbul.

What is obvious on paper, but not in our minds, is that ‘Europe’ is little more than a descriptive term for a region whose borders have shifted throughout history. The brief empire of Alexander the Great expanded east from the Mediterranean Sea to the Indian Ocean, while the political successor of the Roman Empire, the Byzantine Empire, had its capital in modern-day Turkey for over one thousand years. The people who lived along the Mediterranean basin historically mixed, but as Michel Foucher opines: “an absence of clear natural limits led Europe to define itself in terms of differences from its neighbors—the warlike Muslims of the Arab-Berber kingdoms, the Byzantine and Ottoman empires.” Though the Ural Mountains are currently seen as Europe’s eastern boundary, Foucher reminds us that this border is only “established in popular consciousness” and “come[s] from decisions taken in specific historical circumstances.”

If ‘European’ remains ambiguous as a destination, it is easier to identify its emergence as an identity. During the early modern period, the fall of Constantinople to the Ottomans in 1453 and the reconquest of Granada by the Catholic Monarchs in 1492 created the borders we know today. In the same year that they consolidated Christian rule, Queen Isabella I of Castille and King Ferdinand II of Aragon expelled Spain’s Jews and financed Columbus’s first voyage to the Americas. This history is essential because any discussion of racism in Europe is incomplete if it does not include the antisemitism, colonialism and Islamophobia that were present from the start and continue to cast their shadows. Today, right-wing extremists like the so-called “Patriotic Europeans Against the Islamisation of the Occident” claim the mantle of ‘saving’ Europe from Muslim people and culture, willfully ignorant of the essential role Islamic Spain played in the making of contemporary Europe for almost eight hundred years.

The willful disbelief of a multi-ethnic past extends beyond extremists. In “The Myth of Whiteness in Classical Sculpture,” Margaret Talbot reveals the “tendency to equate whiteness with beauty, taste, and classical ideals, and to see color as alien, sensual, and garish,” as “an act of collective blindness.” Refusal to accept that Greco-Roman sculptures were originally painted, despite visible traces of pigment, parallels the inability to believe that the same people who sculpted and painted those statues lived in multi-ethnic societies. Reflecting on the abuse she suffered after defending a school video depicting a high-ranking Black Roman soldier, British classicist Mary Beard lamented: “It feels very sad to me that we cannot have a reasonable discussion on such a topic as the cultural, ethnic composition of Roman Britain without resorting to unnecessary insult, abuse, misogyny and language of war, not debate.”

These responses exemplify the “white fragility” that sociologist Robin DiAngelo characterizes as “triggered by discomfort and anxiety,” but “born of superiority and entitlement.” For example, when DNA analysis of a fossil known as Cheddar Man revealed early last year that the first modern Britons had “dark to black” skin, white fragility led to accusations of “propaganda from the lunatic left,” in the words of one Daily Mail commenter, and speculation that Cheddar Man might have simply been a “foreign visitor” by another. Despite contemporary hysteria about mass migration, dark-skinned people have been a constant, if forgotten, presence in Europe for millenia. The alarming speed with which non-white people can be forgotten in their own lifetimes was recently revealed by the British government’s illegal deportations of dozens of Black British citizens from the Windrush generation. Neither citizenship nor proof of decades spent in the UK can guarantee that one will be ‘remembered’ if the person remembering does not believe that Black and Brown people ‘belong.’

According to Greek myth, Europa was a beautiful Phoenician princess whom Zeus admired. Disguising himself as a white bull, he lured the maiden onto his back, jumped into the sea, and swam across to the island of Crete, where he raped and impregnated her. Although not officially adopted by the European Union, the iconography of this rape—euphemistically referred to as a “seduction” or “abduction”—can be seen in sculptures of Europa riding a white bull outside prominent European Union institutions. Reflecting on Europe’s founding myth, Sarah Dejaegher asks: “How can a tale of a Phoenician woman, unwillingly abducted and sexually assaulted by a rutting, unscrupulous deity be used as a symbol for a unique project of peace, prosperity and freedom in human history, being the voluntary integration of different nations into the European Union?”

My answer is that the same project of ‘peace, prosperity and freedom’ is built on the violent colonialism with which European nations expanded their borders and created the global financial system that underpins the current era. The capitalism that fueled Europe’s growth trafficked millions of human beings from Africa and sold into bondage those who did not perish on the journey. And yet, despite this brutal legacy, in the white European mind, it is not the European who is the barbarian, but the African—conjuring what the resistance writer and psychiatrist Frantz Fanon described as the “absolute evil of the native.” Ta-Nehisi Coates reminds us that “race is the child of racism, not the father,” because Europeans invented an unimaginably violent system of racial control to justify their inhumane treatment of Black slaves and other indigenous people they conquered. In so doing, they created not only one new class of people, the darker colonized, but another in themselves, the white colonizers.

Europeans may not want to see themselves as the descendants of colonizers, and Eastern Europeans in particular reject responsibility for those crimes, but the whiteness that defines Europe impedes them from embracing the descendants of the colonized as equals. As the Windrush scandal shows, not even citizenship can guarantee that governments will respect the legal rights of anyone read as non-white. Continuing to interpret whiteness as a proxy for European prevents Europeans from emerging from the shadows of their racist ancestors and renders them complicit in the preventable deaths on their Mediterranean border. Europe is, and always has been, part of a wider world created from the mixing of different people. No matter how much Europeans choose to forget, their genes and landmarks and art tell the same story: in the distant past, a woman from the Middle East crossed the sea and found a new home after being abducted, raped, and separated from her family.

You could call her Europa. But you would not call her white.

Briant, Pierre and Nicholas Elliott. The First European: A History of Alexander in the Age of Empire. Harvard University Press, 2017.

Dejaegher, Sarah. “Europa And The Bull: The Significance Of The Myth In Modern Europe.” The New Federalist, 13 June 2011, www.thenewfederalist.eu/Europa-and-the-bull-The-significance-of-the-myth-in-modern-Europe.

Eddo-Lodge, Reno. Why I’m No Longer Talking to White People About Race. Bloomsbury, 2017.

Fanon, Frantz. The Wretched of the Earth. Penguin Books, 2001.

Hackett, Mac. “How ‘Daily Mail’ Readers Are Reacting to the News an Early Brit Was Black.” Vice, 7 Feb. 2018, www.vice.com/en_uk/article/gy8gqm/how-daily-mail-readers-are-reacting-to-the-fact-an-early-brit-was-black.

Joe von Hutch is Editor of DADDY Magazine, a writer, and comedian based in Berlin.

Hanna Lee Joshi is a Korean Canadian artist and illustrator based in Vancouver. Her current work flows between abstract energetic forms and figurative work. 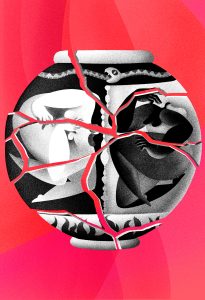 Detached Complicity and Willful Disbelief: Challenging Attitudes on Race and Racism in Europe 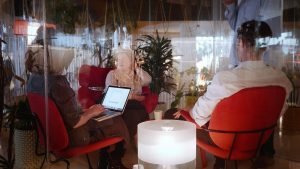 LESSONS IN LOVE I: ON REVOLUTIONARY FLIRTING 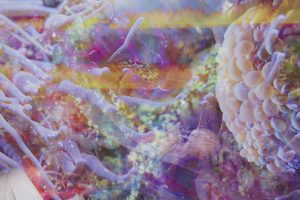 Ethereality at the Edge of Social Media