with TO SEE THE RINGS WITHOUT MAKING A CUT

In On Transience, Freud refers to a walk in the countryside in the company of a young, taciturn man and a young poet. The poet, who we now know was Rilke, “admired the beauty of the scene around us but felt no joy in it.” Freud continues:

He was worried about the thought that all this beauty was fated to extinction, that it would vanish when winter came, like all human beauty and splendor that human bodies have created or may create. All that he would otherwise have loved and admired seemed to him to be shorn of its worth by the transience which was its doom.

Freud suggests that the possible source for the incapacity to love or admire the world—the impossibility of granting value to it—is a concern over the thought that everything is transient. To express that this incapacity is a threat stalking every person, he talks about a poet, a young one at that, as if to say: even those whose task in life is to admire, love, and sing the beauty of the world succumb sometimes to this thought. The world causes surprise as something extraordinarily voluble, and, in so doing, cannot also originate pleasure, satisfaction, enjoyment, or festivity—in other words, it does not lend itself to be an object not only of admiration, but also of love.

The transience of the world’s beauty implies, in Freud’s words, two impulses in the mind: “The one leads to the aching despondency felt by the young poet, while the other to rebellion against the facts asserted.” In other words, these two impulses seem either to cause a melancholic retreat into ourselves as the world ceases to be the object of our desire, or to cause a negation of the separateness of the world independent from our desire. It is as if its inherent transience, what Nietzsche calls the innocence of its becoming, were sad, hopeless, or miserable. Hence we disavow our “aching despondency” by punishing the world as if it were a cruel lover. There is a psychic revenge, a punishment, that is proper to this psychic movement.

A little further ahead, Freud raises the stubborn voice of the one who resists accepting the fleetingness of the world or, could we say, its independence:

No! it is impossible for all this loveliness of Nature and Art, of the world of our sensations and of the world without, will really fade away into nothing. It would be too senseless and too presumptuous to believe it. Somehow or other his loveliness must be able to persist and to escape all the powers of destruction.

This voice of rebellion against the “world of our sensation” and the “world without”—call it the conditions of our experiencing the world—translates, according to Freud, to a “demand for immortality.” The world is the Heraclitean river of time where we can never step in twice because it is never the same river, and we are never the same person. Under such conditions, we feel incapable of experiencing any form of security, quietness, or stillness. So we think the nonsensical idea that the world cannot simply be lost into nothingness, and demand immortality, eternity, in exchange for relief from the terror of transience. It is an attempt to overcome the feeling of abandonment produced by being thrown into the ferocious flux of existence, a way of assuring a home, a way to maintain ourselves. Adam Phillips, paraphrasing Winnicott, writes that “if our existence is out under threat by an unmanageable environmental demand, we use our minds to maintain ourselves. Where there is a mind-object at work there is a loss, or a violation, or a terror, that cannot be acknowledged.” The mind-object is the “mind imagined as an autonomous thing-person inside oneself,” that is, the mind imagined as something separate from the comings and goings of the world, from its state of ruthless becoming. The mind becomes a frozen object as it tries to freeze the world. The mind-object of Freud’s poet-friend works to avoid feeling derelict in a world that blazes mercilessly, but also glaringly and beautifully. It is indeed hard to accept Heraclitus’s maxim that “only in change does fire find its repose.”

Freud attempts to explain to the poet that the transience of the world is not incompatible with our ability to admire and love it, since in fact, the “[l]imitation in the possibility of enjoyment raises the value of the enjoyment.” He continues by writing in a beautiful passage:

It was incomprehensible, I declared, that the thought of the transience of beauty should interfere with our joy in it. As regards the beauty of Nature, each time it is destroyed by winter it comes again next year, so that in relation to the length of our lives it can in fact be regarded as eternal. The beauty of the human form and face vanish in the course of our own lives, but their evanescence only lends them a fresh charm. A flower that blossoms only for a single night does not seem to us on that account less lovely. Nor can I understand any better why the beauty and perfection of a work of art or of an intellectual achievement should lose its worth because of its temporal limitation.

The finitude of (human) life is the condition of possibility of the value and the beauty that the world evokes within us. These are undermined when we try to overcome the impermanence of our human condition. The ancients used to call this hybris, an arrogance that drives us to try to go beyond our human limitations. To be human is, in a sense, to suffer the endless agony of wanting to surpass our very humanity. The question is whether we can effectively achieve this, or if it is even humanly possible.

Freud has shown us that it is arduous to let go of the objects of our love. He says that “the libido clings to its objects and will not renounce those that are lost even when a substitute lies ready to hand. Such, then, is mourning.” Life becomes—for Freudian psychoanalysis—an opportunity to practice exercises of loss, but also recoveries, and the lessons that only they can teach us.

Stillpoint Magazine, like a flower that blossoms on a single night, or like the beauty of the human form, or like any intellectual or artistic achievement, comes to an end, as do all things in this world of relentless mutability for which there is no cure, as Beckett reminds us. The magazine’s transience enhances, not diminishes, its value and beauty and the joy it gave us: it also makes us appreciate, even more, the indelible mark it left in our intellectual and cultural landscape, as well as in our personal lives as readers and contributors. Its “temporal limitation,” as Freud calls it, magnifies the abundance of life it spread everywhere. We will try to mourn it, but perhaps this is an impossible mourning. Let’s not forget that melancholia means not only a defense against loss, but also a way of paying homage to what was lost, an unwavering devotion to our past loves and our history together.

Take care, Stillpoint, we will always love and remember you.

TO SEE THE RINGS WITHOUT MAKING A CUT

A kernel unfolds. Heartwood is made, a crust thickens.

Peeled. Intricate fibers become pulp, corrugated into a semblance of its former structure.

Negentropy is an awkward word.

Thank you to the makers and the readers (meaning makers).

Thank you for the alarming beauty of being together from afar in that exchange.

Carlos Padrón is a psychoanalyst with a background in philosophy and literature practicing and supervising in NYC. He has written and presented on the relations between philosophy, politics, and psychoanalysis, on community psychoanalysis, and on clinical issues related to difference: race, ethnicity, gender, immigration, etc. Carlos has taught at different academic and psychoanalytic institutions, and is a clinical associate of the New School Psychotherapy Program. He appeared in the documentaries Psychoanalysis in El Barrio and Psychoanalysts on the Couch: Notes from a Pandemic. He believes psychoanalysts should get their asses out of the consulting room and into the world. You can follow him on Instagram: @carlospadron_psychoanalysis.

Carlos was featured in Issue 011: SLEEP with his collaborative essay “I Had Too Much To Dream (Last Night) – A Manifesto,” and in Issue 006: SEIZE with “Totemizing the Taboo, or Seizing the Fortress of Whiteness.“

Tabitha Nikolai is a trashgender gutter elf and low-level cybermage raised in Salt Lake City, Utah, and based in Portland, Oregon. She creates the things that would have better sustained her younger self–simulations of a more livable future, and the obstacles that intervene. These look like: fictive text, video games, cosplay, and earnest rites of suburban occult. Her work has been shown at the Portland Institute for Contemporary Art, the Utah Museum of Contemporary Art, Vox Populi in Philadelphia, Ganka Gallery in Tokyo, and has been covered by i-D Magazine, the New York Times, and Art in America. She hopes you’re doing okay.

Tabitha was featured in Issue 007: DESIRE with the artwork Shrine Maidens of the Unseelie Court. 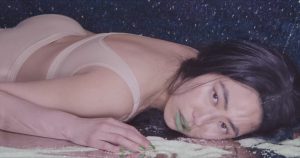 Myopic and Porous, I Reach Out to You 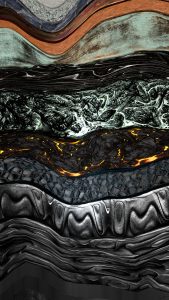 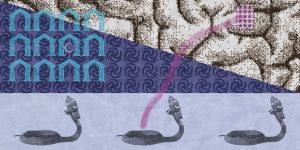 Relevant to the Day