a video by SOPHIE HOYLE

In our relationships, no matter how tender we imagine them to be, there is always an element of dominance and submission. There is always a power dynamic at play. This is inevitable and harkens back to our very first love relation—that with the m/other.

Power is an essential characteristic of this first relationship. While we may wish to remember our m/other or primary caregiver as tender—someone who loved us wholly and unconditionally—the reality is that s/he held an overwhelming amount of power over us. S/he was omnipotent and omnipresent. However, the child holds a huge amount of power over the m/other as well. Though the child may seem powerless physically, the infant has a psychic hold on the m/other or primary caregiver, and while we often tend to fantasize that this original relation was one of symbiotic bliss, the pair are locked into a struggle for power from the outset.

In Love in a Time of Loneliness, Paul Verhaeghe outlines “three general characteristics of this relationship: first, this form of love is total and exclusive; second, from the very beginning, it will inevitably fail to survive, and leaves a feeling of loss which gives rise to desire; third, it is characterised by power.” Therefore, one cannot fully understand the dynamics of subsequent relationships without first understanding the characteristics of this first foundational relation.

Due to these characteristics, the imaginary dual relation can be the most painful form of relationship. Each demands the other be everything, and there is a struggle—sometimes to the death—for power. In this type of relation, the pair are caught in the mirror where difference and shortcomings are inevitable but not tolerated. People often mistake this type of mirror relation for the ultimate form of love, where each person is the other’s ideal fantasy come to life, and seek it out in romantic relationships throughout their lives. A line uttered, “You complete me,”1 invokes swooning in legions. This sentiment is pervasive throughout our culture, exemplified as early as Aristophanes’ famous speech in Plato’s Symposium.2

While often dreamt of and wished for, this type of merger actually evokes fear and even terror. For as Lacan points out, anxiety does not result from separation, as is popularly conceived, but is actually a product of the (love) object being too close. When one cannot escape from the object, there is an immanent threat of merger, which may result in the loss of one’s sense of self, erasure of subjectivity, and even death. We need space for ourselves. We require space from others. We must separate and individuate in order to gain and maintain our own subjectivity and not remain caught in the mirror of the imaginary dual relation.

In traditional Freudian theory, the initial space from this original relationship is created through an intervention by the father. I prefer to call this position the Third, as it may be occupied by a person of any gender. Lacan’s reinterpretation of Freud identifies the father or Third with language or the Law. The key here is to make a cut in this imaginary mirror relation between the m/other and the child, creating space for each and all parties involved. This cut may engender a feeling of loss or separation, potentially painful for all involved, but it also creates the space for desire necessary so that each may inhabit their own subjectivity rather than being caught up in the oppressive demand that each must constantly fulfill the needs of the other. This cut allows movement and metonymy—a space for play, creativity, and invention.

Freud first illustrates this metonymy in “‘A Child Is Being Beaten’: A Contribution to the Study of the Origin of Sexual Perversions” (1919). Using vignettes from his clinical work, Freud describes scenes from masturbation fantasies of children, exemplifying and delineating positions each of us may inhabit when in relation to one another, sexually or otherwise. Each individual participating in the relation is also able to take on the position of the other as well. So whether that be m/other-child, dominant-submissive, or self-other, both are able to share in the power and/or submission of the other participant. Furthermore, as Freud illustrates, even in this dual relation, there is always already a third position—that of the witness: the one watching the scene. When we engage in an act, sexual or otherwise, we are able to see ourselves from the outside in a way—witnessing the scene being played out as if from another perspective in the room, or from the perspective of an/other whose point of view we may have internalized. This perspective may be enjoying or judging (or both). Either way, it is present. There is always an/other in the room with us, even if only in the room of our mind.

These various positions are enacted even when there is only one person involved. In masturbation, in the sexual relation with oneself, with one’s own body, there are still at least three positions: those of performing the sexual act and receiving the sexual act, as well as of the witness. One witnesses oneself performing the sexual act on oneself, which in itself is often a form of beating. The genital organ is beaten, which may be pleasurable but also aggressive. One therefore occupies both and all positions—the dominant, submissive, and witness. Therefore, no matter which position one may be occupying in relation to oneself or an/other, one may concurrently slide into the positions of the other(s) as well, therefore occupying both (and all) positions at once. One becomes voyeur and exhibitionist, being seen while enacting and observing the scene, exposing oneself as one bears witness to the exposure. It is in this way that the relation of m/other-child-father or self-other-third reflects the sexual relationship between partners [self-other-witness]. The third position allows for this metonymy.

Psychoanalysis differs from psychology in that the psychoanalyst attempts to provide the space necessary for the analysand, in which the analysand may explore, play, invent, and come to inhabit he/r subjectivity. It is essentially this cut—this gap—that is necessary. Whereas a typical psychologist or psychotherapist may continue to take up a position in the relation—often referred to in Lacanian psychoanalysis as “the subject supposed to know”—the psychoanalyst does he/r best to avoid being caught up in the relationship dynamics that the analysand is enacting and working through in the psychoanalytic situation. Instead the analyst maintains the awareness that the analysand is truly in relation with he/rself—with those others, objects, and identifications s/he has internalized throughout he/r lifetime. It is the position or work of the analyst not to enact these relationship dynamics with the analysand (as much as possible), as the friends, family, and love relations the analysand comes into contact with in other areas of he/r life inevitably will. Rather the psychoanalyst must hold space for the analysand, where s/he may begin to see he/r own relationship patterns and transference dynamics more clearly and come to terms with the ways s/he is enacting and reenacting scenes and situations from he/r childhood over and over again—sometimes for he/r betterment, but too often to he/r detriment. In this way, though the analysand may feel the analyst to be cold and withholding at times, refusing to offer advice or comfort, the maintenance of the analytic position may be the most tender act of all.

Verhaeghe, Paul. Love in a Time of Loneliness: Three Essays on Drive and Desire. Karnac, 1999.

Sophie Hoyle is an artist and writer whose work relates personal experiences of being queer, non-binary, disabled and part of the MENA (Middle East and North Africa) diaspora to wider forms of structural violence. From lived experience of chronic health conditions including trauma, or Post-Traumatic Stress Disorder, they began to explore the politics of healthcare and history of biomedical technologies, which often overlaps with the histories of state and military surveillance and control.

Recent projects include Psychic Refuge (2021), a research project exploring mental health, trauma and its treatment in Palestine (OPT); Perspectives on Visibility: Hypervigilantes (2021), a collaborative film produced by Access, Power, Visibility collective (Arjun Harrison-Mann, Benjamin Redgrove, and Kaiya Waerea); and Hyperacusis (2021), which are two films made as part of a EMARE/EMAP residency at Antre Peaux, Bourges. 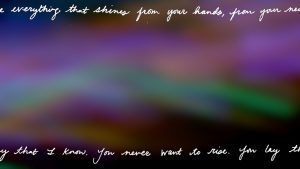 “I Had Too Much to Dream (Last Night)” – A Manifesto 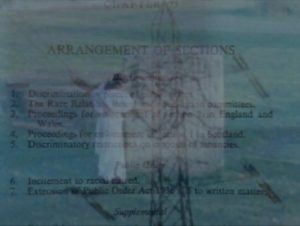 IN-BETWEEN THE LAW AND TRANSGRESSION: DESIRE, ETHICS, AND SYMBOLIC DESTINY IN PSYCHOANALYSIS 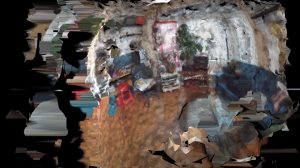 On Transience: A Farewell to Stillpoint